The Defra-coordinated annual Bees’ Needs Week got underway today (Monday 13 July) with an online launch to highlight what everyone can be doing at home to care for pollinators.

Bees and other pollinators play a crucial role in food production and agriculture – they contribute the equivalent of more than £500...Read More »

In 2018 this Government changed the law (Assaults on Emergency Workers...Read More » 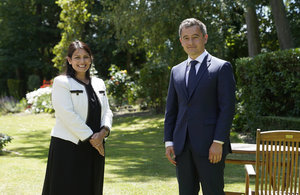 Outside the EU, a bright future awaits Britain

Leaving the European Union is, I’ve often argued, a bit like moving house. Instead of being lodgers under someone else’s roof we are choosing a new place in the world where we’re in control. Four years after we made the decision to leave the EU, the reasons for moving are...Read More »