08/12/2021 – The COVID-19 pandemic has taken a heavy toll among elderly people although retirees have seen their pension payments well protected across OECD countries. Future pension entitlements have also been well protected thanks to the exceptional policy response to the crisis, according to a new OECD report.

Pensions at a Glance 2021 says however that the long-term financial pressure from ageing persists. Pension finances deteriorated during the pandemic due to lost contributions, and shortfalls have been mainly covered by state budgets. Putting pensions systems on a solid footing for the future will require painful policy decisions, 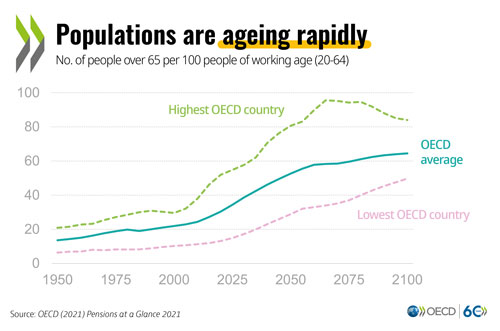 Although life expectancy gains in old age have slowed since 2010, the pace of ageing is projected to be fast over the next two decades. The size of the working-age population is projected to fall by more than one‑quarter by 2060 in most Southern, Central and Eastern European countries as well as in Japan and Korea.

Young people have been severely affected by the crisis and might see their future benefits lowered, especially if the pandemic results in longer-term scarring and difficulties in building their careers. Allowing early access to pension savings to compensate for economic hardship, as observed in some countries such as Chile, may also generate long-term problems: unless future higher savings offset these withdrawals, low retirement benefits will be the consequence.

Mandatory schemes provide an average future net replacement rate of 62% to full-career average‑wage workers, ranging from less than 40% in Chile, Estonia, Ireland, Japan, Korea, Lithuania and Poland to 90% or more in Hungary, Portugal and Turkey.

Pensions at a Glance 2021 says that the biggest long-term challenge for pensions continues to be providing financially and socially sustainable pensions in the future. Many countries have introduced automatic adjustment mechanisms (AAM) in their pension systems that change pension system parameters, such as pension ages, benefits or contribution rates, when demographic, economic or financial indicators change. These automatic adjustment mechanisms are crucial to help deal with the impact of ageing.

About two‑thirds of OECD countries use some form of AAM in their pension schemes, adjusting retirement ages, benefit levels and contribution rates and using an automatic balancing mechanism. OECD analysis shows that, over the years, the automatic adjustment mechanisms were sometimes suspended or even eliminated in order to avoid pension benefit cuts and retirement-age increases. Yet, compared to the alternative of discretionary changes, AAMs can be designed and implemented to generate changes that are less erratic, more transparent and more equitable across generations.

The report and country notes for France, Germany, Italy, Mexico, Spain, Sweden, the United Kingdom and the United States are available at https://www.oecd.org/pensions/oecd-pensions-at-a-glance-19991363.htm.

25/11/2021 – The COVID-19 pandemic has not only had devastating effects on physical heath and mortality but has touched every aspect of people’s well-being, with far-reaching consequences for how we live and work, according to a new study by the OEC… END_OF_DOCUMENT_TOKEN_TO_BE_REPLACED

18/11/2021 – Swift and effective government support has helped France to rebound rapidly from its COVID19-induced recession. Using the country’s announced Recovery and Investment Plans to invest in education, worker training, and the green and digit… END_OF_DOCUMENT_TOKEN_TO_BE_REPLACED

09/11/2021 – COVID‑19 contributed to a 16% increase in the expected number of deaths in 2020 and the first half of 2021 across OECD countries. Life expectancy fell in 24 of 30 countries with comparable data, with drops particularly large in the Unit… END_OF_DOCUMENT_TOKEN_TO_BE_REPLACED

27/10/2021 – Members of the OECD Development Assistance Committee (DAC) today issued a joint Declaration ahead of COP26 committing to align official development assistance (ODA), which totalled USD 161 billion in 2020, with the goals of the Paris Ag… END_OF_DOCUMENT_TOKEN_TO_BE_REPLACED