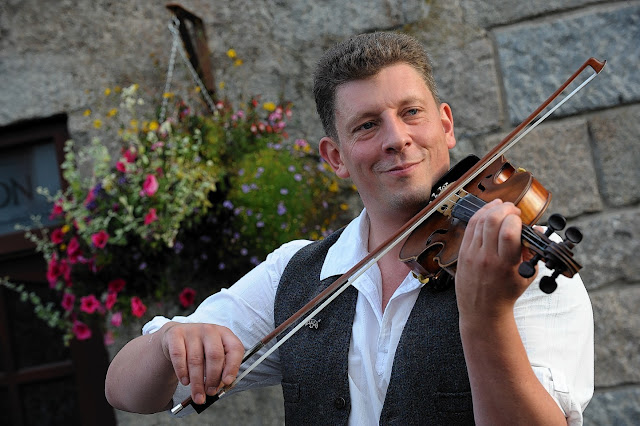 For our last concert of 2021 Friends of Wighton can’t provide the usual mince pies and chocolates but we are offering a very special pre-Christmas Zoom treat.
Our guests are the award-winning traditional singer Shona Donaldson and the far-famed Tarland fiddler Paul Anderson MBE (pictured).
Shona Donaldson grew up in Huntly in a musical family, learning the fiddle and attending traditional music festivals including Strichen and Keith. As well as picking up the usual song repertoire, Shona also learned from bothy ballad singers like Jock Duncan and Geordie Murison. Soon, to the delight of her mentors she was winning prizes in the normally male–dominated bothy ballad world.
In 2015, Shona became the first woman to win the coveted Bothy Ballad Champion of Champions title to add to her 2009 Scots Singer of the Year award. She is also an accomplished songwriter.
Paul Anderson MBE is widely regarded as the finest fiddle player of his generation. Having found, at age five, an old French violin under the spare bed in his grandparents’ house, he has gone on from there to win all the major fiddle prizes including the Glenfiddich Scottish Fiddle Championship.
Paul has toured extensively here and abroad and is also well-known as a composer with over 300 works including many for film, television and theatre. His 8 solo albums and over 40 album with other musicians have received international acclaim.
Since lockdown began the couple, who recently celebrated their 14th wedding anniversary, have produced 86 “Live from the Lounge” shows from the Tarland home they share with sons Hector and Roderick. These can be checked out on Paul’s Facebook page.
Sheena Wellington is inviting you to a scheduled Zoom meeting.
Lunchtime Recital with Shona Donaldson, traditional singer, and Paul Anderson MBE, fiddle
Wednesday 1st December 1.15pm – 1.45pm (Zoom available from 1pm)
Join Zoom Meeting
https://us02web.zoom.us/j/81867139033?pwd=M3dmd3ErcnZwdVU0KzJyeWVDck5FUT09
Meeting ID: 818 6713 9033
Passcode: 057619