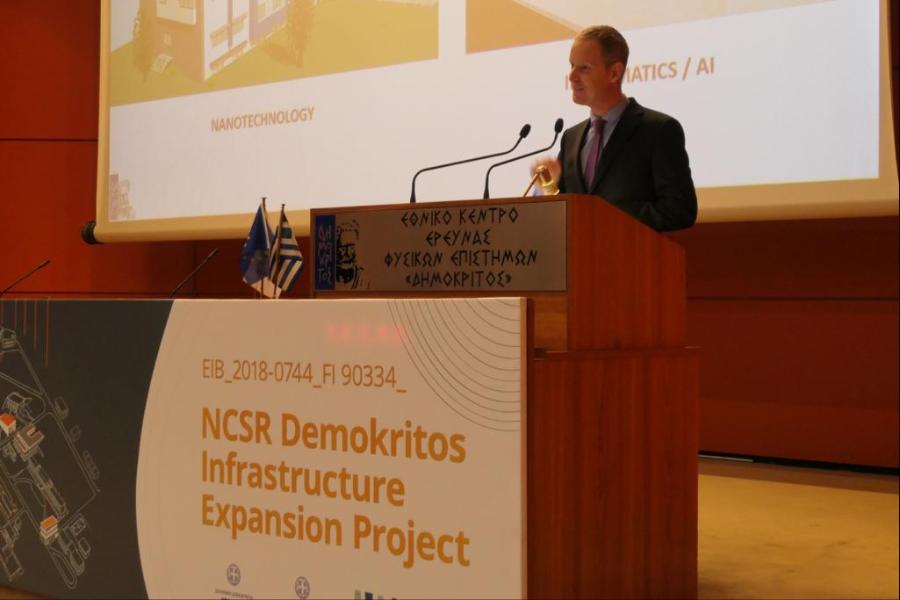 The European Investment Bank today confirmed its support for the EUR 48 million expansion and modernisation of the National Centre for Scientific Research “Demokritos”, the largest public research centre in Greece. The project has also benefited from the support of InnovFin Advisory, one of the InnovFin tools, which provided Demokritos with advice to improve its access to finance.

The EIB will provide EUR 24 million for the project that includes construction of three new buildings and renovation of existing facilities to host renowned research institutes. The new investment will also expand capacity at the Lefkippos Technology Park, located within the Demokritos campus, to enable increased research collaboration among Greek and international business partners.

100 specialist senior research jobs are expected to be created once construction is complete and more than 38,000 m² of specialist research facilities will be constructed, renovated or improved.

“Greece is home to world class research, cutting edge innovation and collaboration with partners from around the world. However, new investment is essential to ensure that Greek researchers are not forced to take their skills and knowledge abroad. The impressive planned expansion of Demokritos marks a new era in Greek public research and will strengthen Greek contribution for natural sciences. I welcome the European Investment Bank’s vote of confidence in Greek research and their support for the EUR 48 million development programme. This builds on the EIB’s recent support to transform education and learning at universities across Greece and the Bank’s key role enabling the establishment of the Hellenic Foundation for Research and Innovation.” said Christos Staikouras, Minister of Finance of the Hellenic Republic and Governor of the European Investment Bank.

“The European Investment Bank recognises the importance of new investment across Europe to build on innovation strengths, enhance research collaboration and improve skills. The European Investment Bank is pleased to be able to provide EUR 24 million for this exciting and ambitious project to transform the National Centre for Scientific Research “Demokritos” and provide world-class opportunities for future generations of Greek researchers. The first ever EIB financing for Demokritos reflects the EIB’s commitment to support innovation and education in Greece and demonstrates how EIB financing is benefiting this country.” said Andrew McDowell, European Investment Bank Vice President responsible for lending operations in Greece.

“Demokritos represents the impressive strengths and diversity of Greek research that makes a key contribution to European innovation. Transformation of the Demokritos campus and Lefkippos Technology Park is a flagship project of national and European importance. This demonstrates the impact of European engagement to ensure a better future for Greece.” said Margaritis Schinas, Vice President of the European Commission.

All of us at the National Centre for Scientific Research “Demokritos” are humbled by the recognition and trust the Centre receives by the European Union and the Hellenic Republic. We are grateful to EIB for their valuable support. We are confident and fully committed to transform Demokritos’ campus into a vibrant ecosystem for Research and Innovation, accomplishing scientific advancements of world-class impact and innovation for the benefit of the Greek Society, said the current and former Presidents of the Centre Drs Vassilis Kilikoglou and Georgios Nounesis.

Demokritos is the largest multidisciplinary research centre in Greece, with about 630 researchers working in projects funded mainly by grants from State funds, the European Union and the private sector. The Centre consists of five independent Institutes focusing on different scientific fields and is supervised by the General Secretariat of Research and Technology, which is in the Ministry of Development and Investments