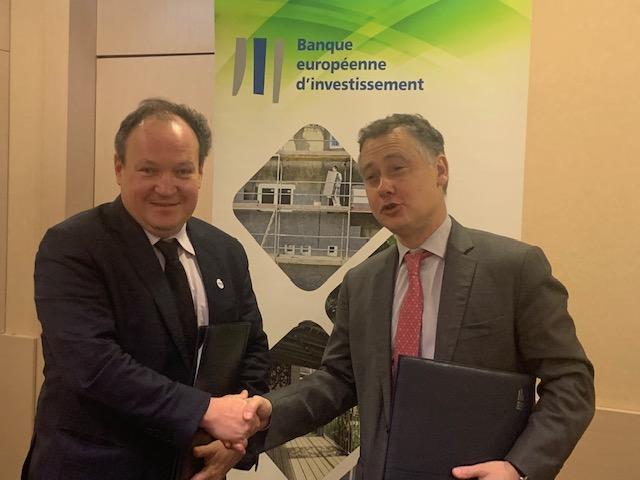 The Hydrogen Council, a global initiative of CEOs representing energy, transport, and industry organisations advocating for the accelerated deployment of hydrogen solutions, and the European Investment Bank (EIB), one of the world’s largest providers of climate finance, today signed a landmark agreement to collaborate on the development of innovative schemes to finance hydrogen projects to address climate change. Under this partnership delivered through the InnovFin Advisory program, EIB will provide strategic financial advice and support to companies preparing to deploy large-scale hydrogen projects, making such solutions more readily available to consumers around the world.

Hydrogen technologies are poised to play a major role in accelerating the energy transition but need to be scaled up. Today’s collaboration between the Hydrogen Council and the EIB is a step toward this objective. As such, the Hydrogen Council is engaging the global investment community, with the understanding that transitioning towards a low-carbon economy will require significant financial commitments. The hydrogen economy will require annual investments of $20-25 billion until 2030[1]. Though a significant investment, the amount is a fraction of what the world invests in oil and gas and renewable electricity per year. The EIB and the Hydrogen Council’s cooperation will help to accelerate and facilitate access to funding for a number of hydrogen projects which will benefit from the EIB’s InnovFin Advisory support.  The agreement will also contribute to identify and source hydrogen investment projects which could be financed by the EIB, and in so doing address energy transition and carbon reduction challenges.

The Hydrogen Council and EIB, through InnovFin Advisory – a programme supported by the European Commission to advise companies to structure their R&I projects in order to improve their access to finance – will work together on identifying relevant hydrogen projects. EIB will provide to the Council and its members extensive knowledge sharing and support to navigate the financing schemes that exist within and beyond the EIB, in order to bring hydrogen projects to life. Indeed, the Bank offers numerous options for companies looking for funding such as corporate loans, project finance, or venture debt.  In addition, this collaboration will help to identify potential funding gaps related to hydrogen projects, and to explore the need for potential new financial instruments to address such gaps.

EIB Vice-President Ambroise Fayolle said: “We share common goals with the Hydrogen Council. The European Investment Bank is the European Union’s Climate Bank and financing new technologies and innovative projects that help to fight climate change is at the very heart of what we do. This is why I am particularly delighted that through our InnovFin Advisory partnership with the European Commission, we are supporting the development of the hydrogen market in Europe, which will have a positive impact globally.”

Today’s signing took place at the International Energy Agency’s (IEA) 2019 Ministerial side event on hydrogen, chaired by the Ministers of Japan and the Netherlands and opened by IEA Executive Director Fatih Birol. Birol commented: “Hydrogen has great potential to play a key role in achieving a clean, secure and affordable energy future, as the IEA highlighted earlier this year in our ground-breaking report on the subject for the G20. The world now needs to take tangible action by scaling up hydrogen deployment through projects that can make a difference.”

In a recent report, The Future of Hydrogen, the IEA made clear that hydrogen is experiencing unprecedented momentum around the world due to its potential to tackle various critical energy challenges. Similarly, the Hydrogen Council has found that hydrogen can address 18% of global energy demand and abate one fifth of emissions.

Pierre-Etienne Franc, Hydrogen Council Co-Secretary and Vice President of the Hydrogen Energy World Business Line at Air Liquide commented: “This collaboration agreement signals to the market that a major shift is about to take place. As confidence in hydrogen continues to grow, investors are coming to the table to back innovations and turn them into a reality. Hydrogen Council members recognize the strong business case for hydrogen and, as we work alongside the EIB, our goal is to find new and innovative ways to fund these solutions. Only when we scale deployment will we help realize the full potential of hydrogen to drastically decrease energy-related CO2 emissions.”

Hydrogen Council members continue to develop hydrogen solutions that will play a key role in accelerating the energy transition and the coalition has already identified more than 20 hydrogen projects as examples of initiatives that are ready to be scaled, and with this agreement, the Hydrogen Council and the EIB will guide and support investments in clean, efficient and profitable solutions based on hydrogen and ultimately accelerate the transition to a carbon neutral economy.

About EIB’s Innovation Finance Advisory (IFA): IFA aims to improve the bankability and investmentreadiness of innovative or complex projects in need of substantial, long-term investments. It also provides advice to improve the investment conditions for access to risk finance for Research, Development and Innovation (RDI) through horizontal activities.

Under Horizon 2020, the EU research and innovation programme for 2014-20, the European Commission and the European Investment Bank Group (EIB and EIF) launched the InnovFin programme, comprising a range of financial instruments and advisory services to help innovative firms access finance more easily. Innovative projects involving public and private partners need to be well prepared and structured before they can be presented to potential lenders and investors. Innovation Finance Advisory assists such priority projects in their preparation of a viable business plan, advising them on the appropriate strategy, governance and financial structure.

About the Hydrogen Council: Launched at the World Economic Forum in Davos in 2017, the Hydrogen Council is a first-of-its-kind global CEO initiative to foster the role of hydrogen technologies in the global energy transition. The coalition of 60 members from across industry sectors and key markets collectively represents total revenues of over €2.6 trillion and close to 4.2 million jobs around the world.4

The Hydrogen Council helps to facilitate collaboration between key stakeholders, hosts events geared toward international advocacy, and educates the public about the power of hydrogen. To date, the Council has published three studies exploring the role of hydrogen in the energy transition and detailing a comprehensive vision of the long-term potential of hydrogen and a roadmap for deployment. To find out more visit www.hydrogencouncil.com and follow us on Twitter @HydrogenCouncil.