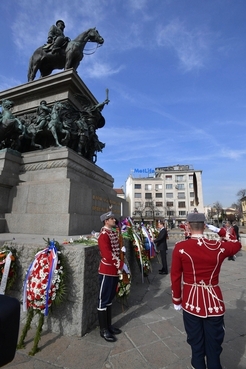 The Monument to the Tsar Liberator is one of the most beautiful monuments in Sofia. It is a symbol of the Bulgarian people’s gratitude towards Russia for playing a key role in liberating Bulgaria from the Ottoman rule, which had lasted for five centuries. The monument’s front contains an inscription that reads: To the Tsar Liberator. Grateful Bulgaria.

The monument was designed by Arnoldo Zocchi, an Italian sculptor who also created monuments to Garibaldi in Bologna and to Columbus in Buenos Aires. Construction started in 1901, and the monument was unveiled in 1907.

The monument is 16.5 metres high, and its centrepiece is a statue of Tsar Alexander II on horseback, holding a manifesto on the declaration of war.

The monument’s eastern side represents General Mikhail Skobelev, who distinguished himself during the battle of Pleven. Next to Skobelev is an equestrian statue of Grand Duke Nicholas Nikolaevich, chief commander of the Russian army.

The western side contains statues of General Iosif Gurko, who commanded the troops that liberated Sofia, and Russia’s ambassador to Constantinople Count Nikolai Ignatyev, who signed the Treaty of San Stefano on 3 March 1878.