Getting your training right allows you to attract better staff, and retain talent. Our Learn, Engage, Adapt, Perform (LEAP) training programme was developed in-house for new and existing leaders. It’s a 12 month programme where delegates can explore and understand their role as a leader and build excellent leadership skills. Nearly 500 staff have received the training so far, in just under three years.

So I’m delighted that the programme has been recognised and celebrated with a Princess Royal Training Award. 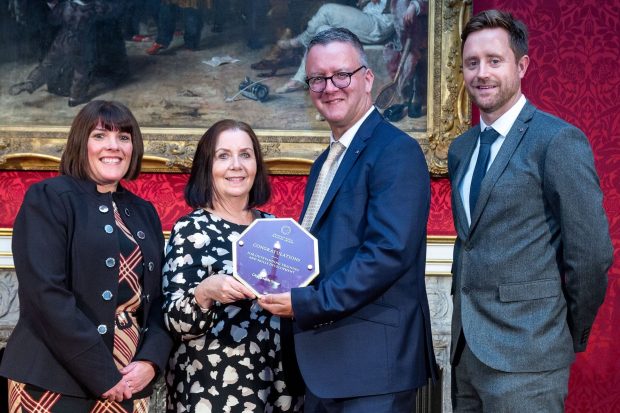 I helped commission, design and develop LEAP and I was nominated by my training colleagues to accept the award from HRH Princess Anne on behalf of the team. I was honoured, but to say I was nervous was an understatement!

I was joined at the awards ceremony by my colleagues Mari Rees and Richard Perry, and Mark Shackell, a leader from our Contact Centre who has come through the programme.

The awards ceremony was a wonderful way to recognise the hard work of colleagues who created the LEAP programme. Hearing all the stories of the other award winners made me feel proud that the DVLA was in such good company.

Every member of the team has played an important part in gaining this award, I was pleased to represent them on this special occasion.

Entering St James’s Palace was a surreal experience. Taking in the beautiful surroundings and being part of the excitement and nervousness of all the other award winners was like nothing I have experienced before.

After being invited into the waiting hall we mingled with the other award winners ahead of the presentation ceremony.

As the award recipient, I had to leave my colleagues to be seated in a separate area. I waited patiently until I was called to step forward. It was a pleasure to be greeted by Princess Anne who asked me how many staff worked for the agency and congratulated us on our achievements.

After the ceremony, the award recipients were taken to small tables and Princess Anne took the time out to visit each of the tables, where we all got to give a quick overview of our achievements. I thought that was a very nice touch from someone whose time is always at a premium.

The whole day was fantastic and something I will always remember. I feel privileged to have been part of it.

This award sees DVLA join a select group of businesses and organisations who have achieved the award, including household names such as IBM, The Royal Bank of Scotland and the Royal Navy.

On average only about 40 of these sought-after awards are given each year. We are only the second Civil Service organisation (the other was HMRC) to have achieved this standard of excellence in the four years since the awards launched.

Great training and opportunities to develop and progress are at the core of our values. With this award under our belt, LEAP goes from strength to strength – the next round of delegates are three months into the latest programme and enjoying every minute.

To find out more

You can read about what it’s like to work at DVLA and take a look at our latest vacancies on Civil Service jobs.